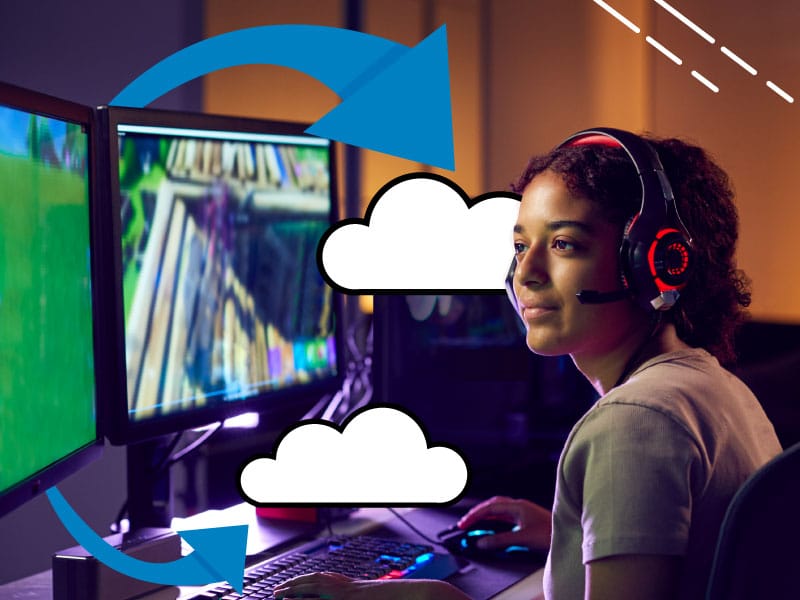 Cloud gaming is revolutionizing the way we play video games. This new technology allows gamers to immerse themselves in any game, anywhere, at any time. Major companies such as Sony, Microsoft, and Amazon are evolving with the age of streaming by offering a platform for cloud gaming. The global cloud gaming market size is predicted to reach USD 7.24 billion by 2027, according to a Grand View Research, Inc. The rapid developments in cloud technologies have enabled the expansion and distribution of cloud gaming models.

Cloud gaming technology enables instant remote access to interactive games for players to experience through their own devices. Users can stream games, just like videos, through their devices, removing the need for expensive consoles and gaming equipment. The game is launched from a remote server (the cloud) of the company providing the gaming service. When playing a video game on the cloud, the player inputs commands that are then sent to and processed by the server, followed by a response sent back and streamed on the player’s display. Cloud gaming resolves the problem online gamers face with heavy software downloads and lengthy loading times.

While there are concerns about latency with cloud gaming, major service providers like Google and Amazon are making substantial efforts to establish cloud data processing hubs in major cities. The purpose of this effort is to reduce the likelihood of latency affecting gaming for users who are geographically dispersed. If players aren’t local to the data processing hubs, they could find themselves at a disadvantage if they don’t have access to a high-speed fiber internet connection. Internet service providers such as AT&T are striving to build infrastructures for a fiber-connected world, making high-speed internet accessible to individuals living in the city and in rural areas. Streaming requires a significant amount of bandwidth, and loss of data during a gaming session could be detrimental to the user experience.

Play anywhere, at anytime. Cloud gaming gives you the freedom of taking your favorite pastime wherever you go without having to carry around your bulky console. PC gaming has increased in popularity due to the fact that online gaming subscriptions are more affordable than gaming devices. Azulle’s Access4 Mini PC can power your cloud gaming through any HD monitor or TV, providing 4K multi-display configurability and high performance. The Access4 is built to operate as a flexible, powerful alternative to a desktop PC. Its small form factor is equipped for speed, connectivity, and functionality, giving you the ability to take your cloud gaming to the next level.

5 Reasons Why PC Gaming Is Better than Console Gaming

Companies That Recommend Us